Bang & Olufsen was founded in 1925 in Struer, a small town in the north western part of Denmark, by two enterprising young engineers, Peter Bang and Svend Olufsen. They created the business that was to become an international design icon and a global symbol of audio-visual excellence.
Today Bang & Olufsen a/s is world renowned for its distinctive range of quality televisions, music systems and high-performance loudspeakers; products that combine technological excellence with emotional appeal in a sensational design language

Bang & Olufsen have divided their product offering into the following different names:

The Bang & Olufsen equipment is connected by a proprietary cable that we are able to supply. The way this is accomplished is that televisions, audio systems and “link rooms” connect to each other by what is known as a MasterLink cable. Speakers are connected to televisions and audio systems through a cable known a PowerLink.
Feel free to enquire about any of these connectivity requirements so that we can ensure you can connect your Bang & Olufsen system together.

We are proud to be a custom installer of Bang & Olufsen equipment. We are able to supply and install any audio or television systems that you desire.
With an extensive track record and over 15 years experience of dealing with Bang & Olufsen products between our team, we are well suited to meet your Bang & Olufsen expectations.

We are proud to showcase a few of our showcase installations and projects since we started servicing Bang & Olufsen here in Cape Town. 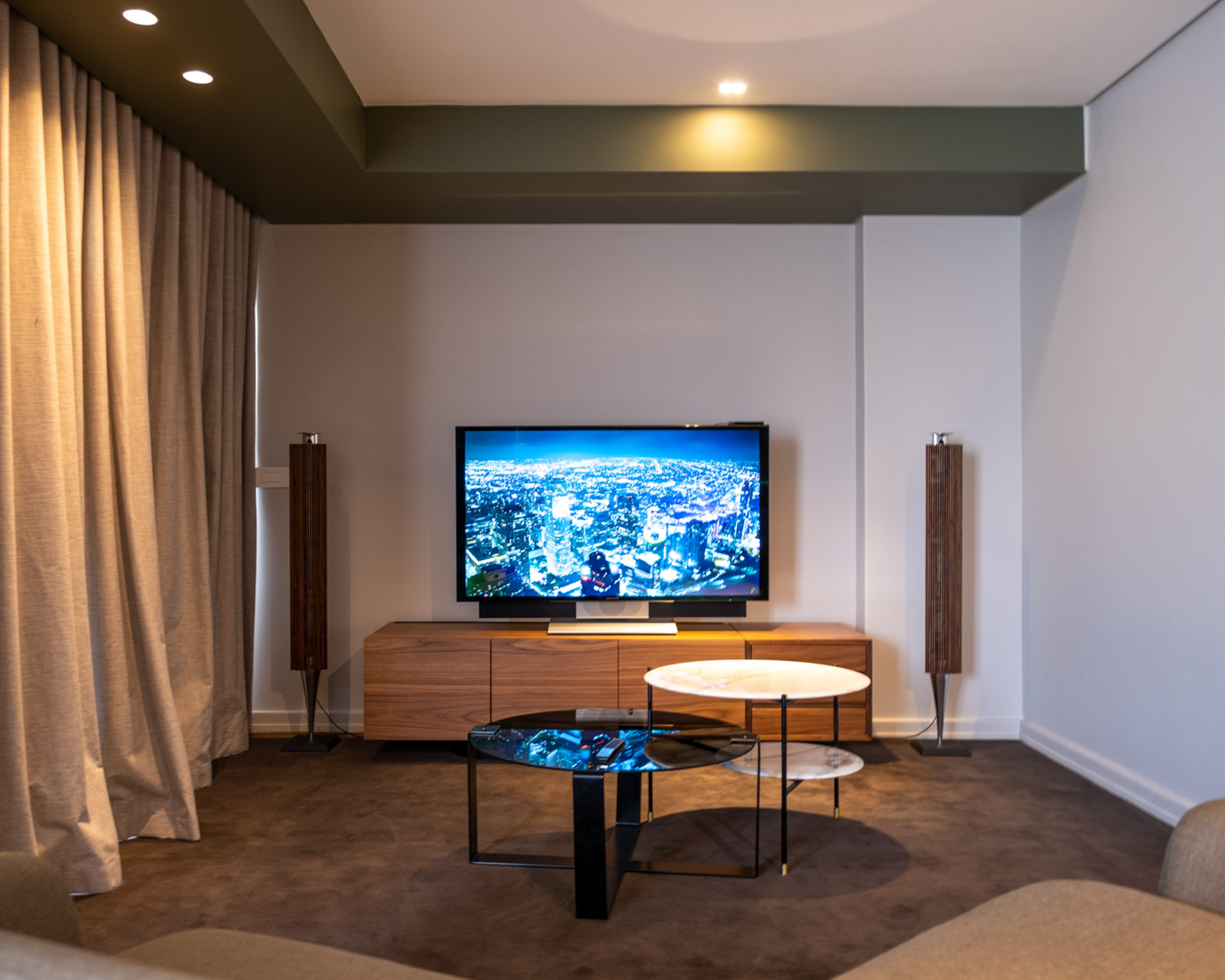 We are proud to have carried out the installation and setup of this BeoVision Avant 55″ television with BeoLab 18 speakers.
The installation includes a Araknis home network and WiFi system. Expertly completed by Mirror Edge Networks in Cape Town. 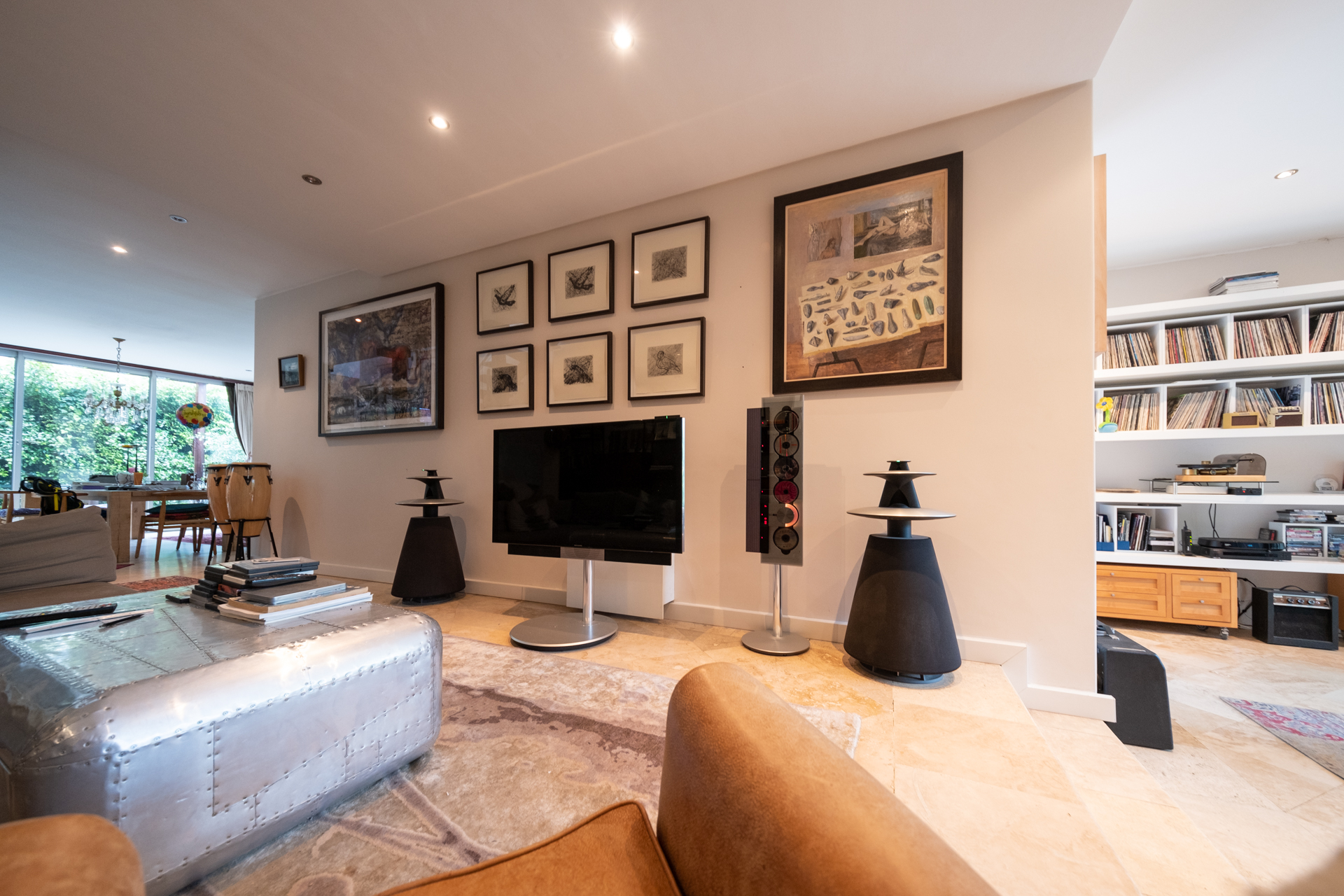 Mirror Edge Networks carries out the sales, installation and service of this Bang & Olufsen installation in Cape Town.
This stunning installation includes a BeoVision Avant 55″ television installed on a motorised floor stand. Connected to the BeoVision Avant are a pair of BeoLab 5 floor standing HiFi speakers. The BeoSound 9000 CD player is connected via MasterLink to enable playback of CD’s through the Bang & Olufsen system.
Television is provided to the television via DSTV Explora satellite decoder and an Apple TV4k for Netflix and video streaming. 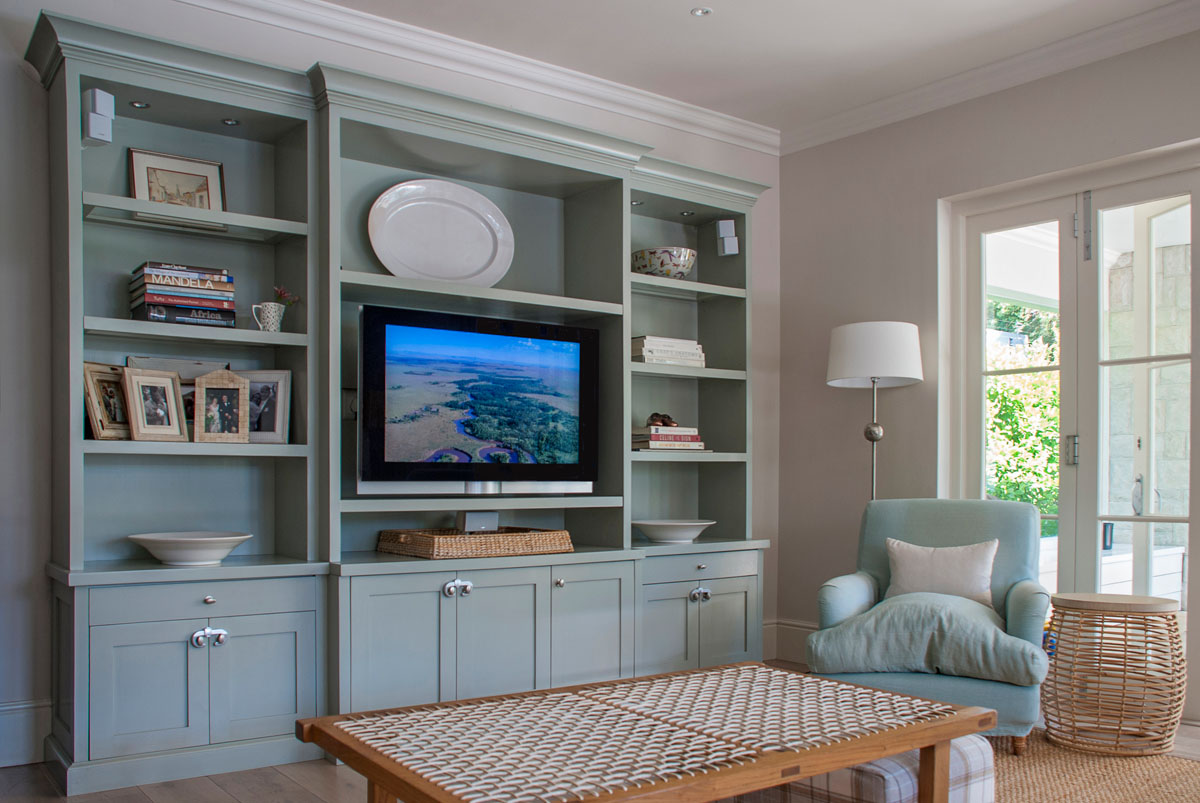 Our first completed Bang & Olufsen installation since starting Mirror Edge Networks. This installation features the integration of BeoVision 7 television with Bose surround sound speakers. The Lounge television is connected via MasterLink to a BeoVision 8 television in the study.
The DSTV Explora HD satellite decoder is hidden from view in the television cabinet and controlled via the Beo4 and Beo5 remote control with a Lintronic IR controller. 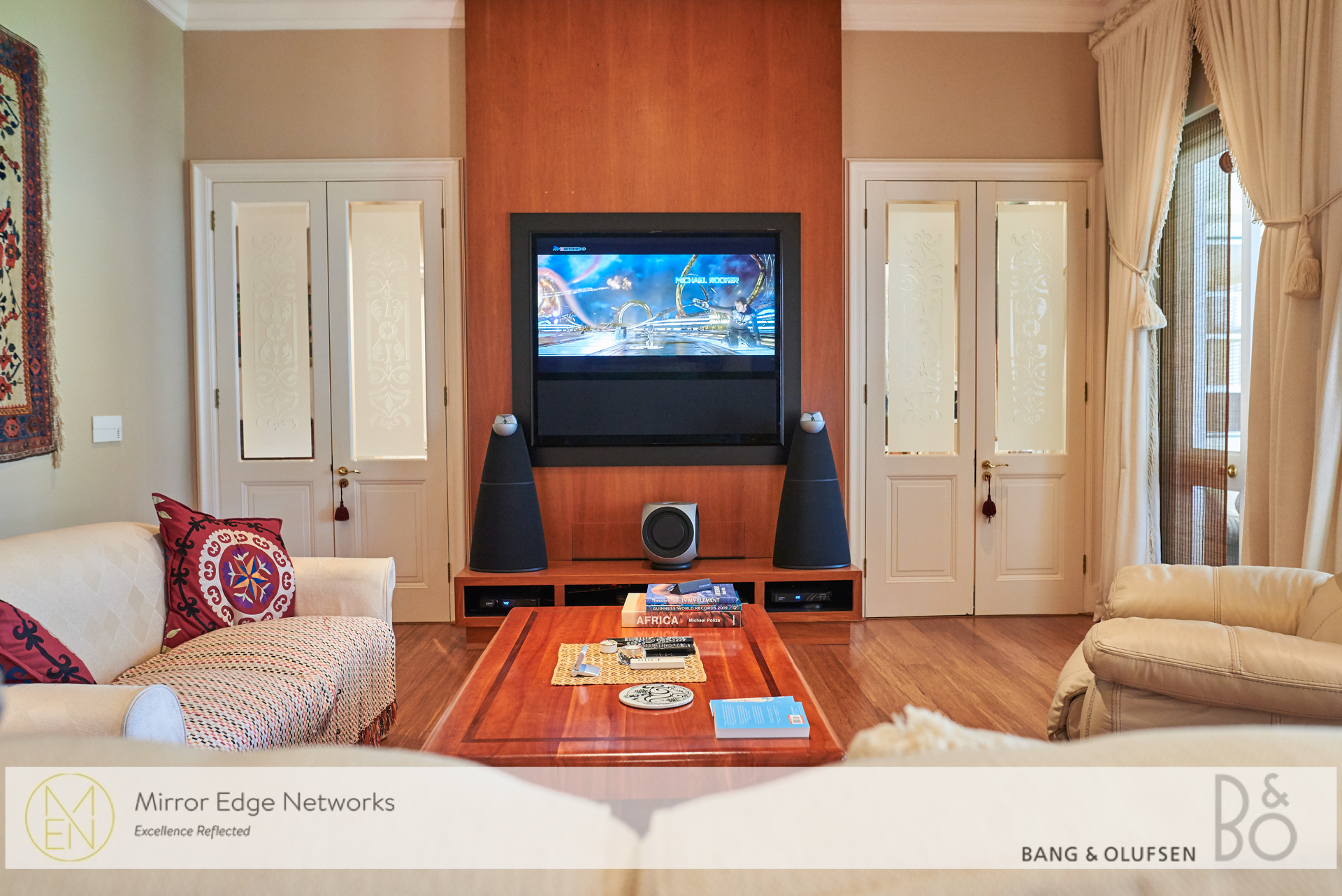 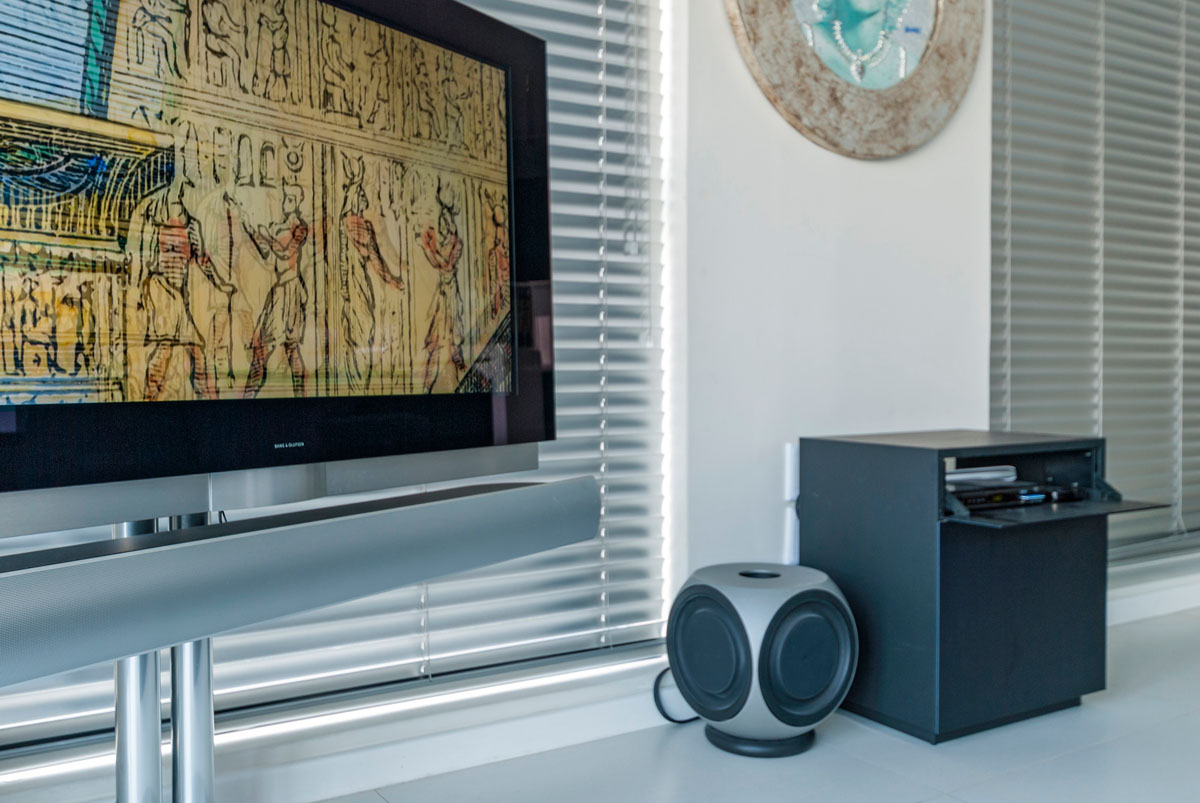 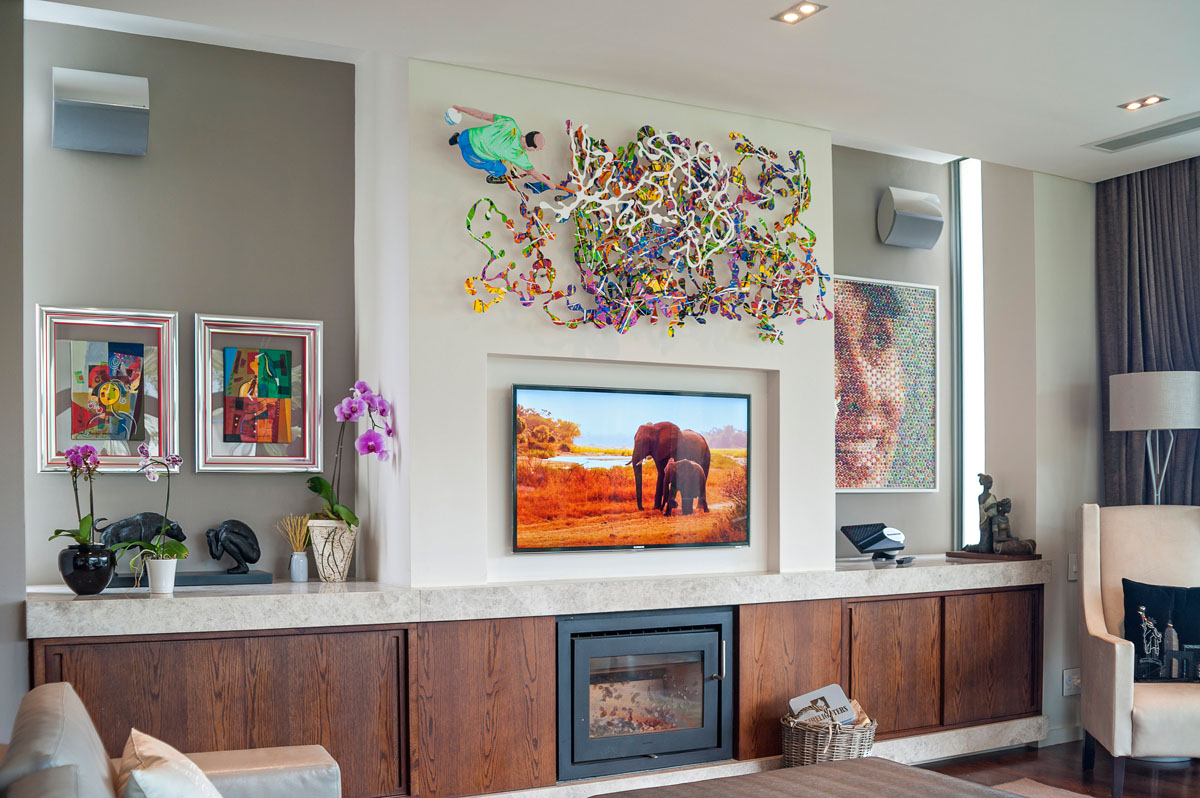 Mirror Edge Networks is proud to have carried out the installation of this BeoSound 5 music system and BeoLab 4000 speakers in Camps Bay. 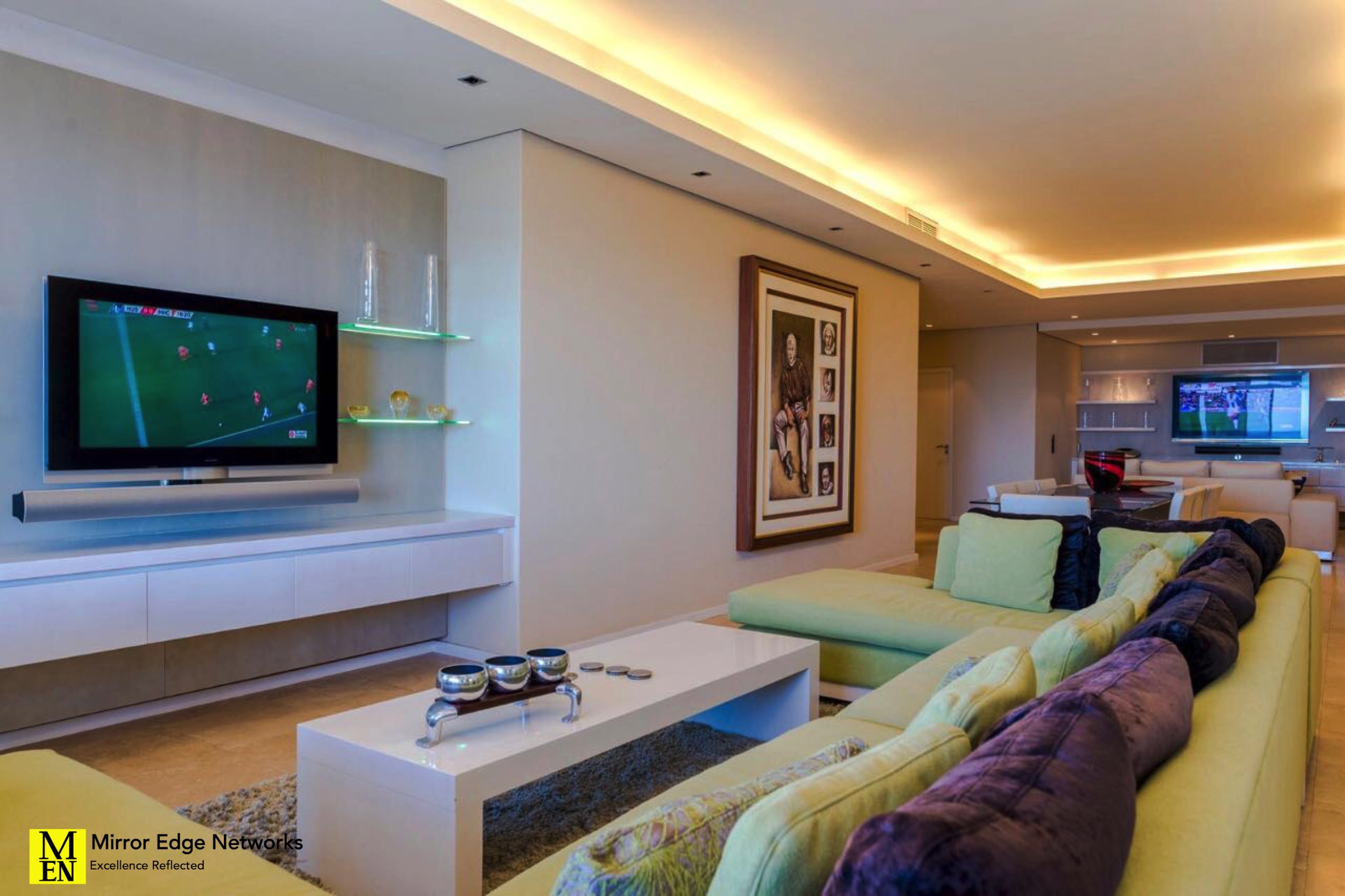 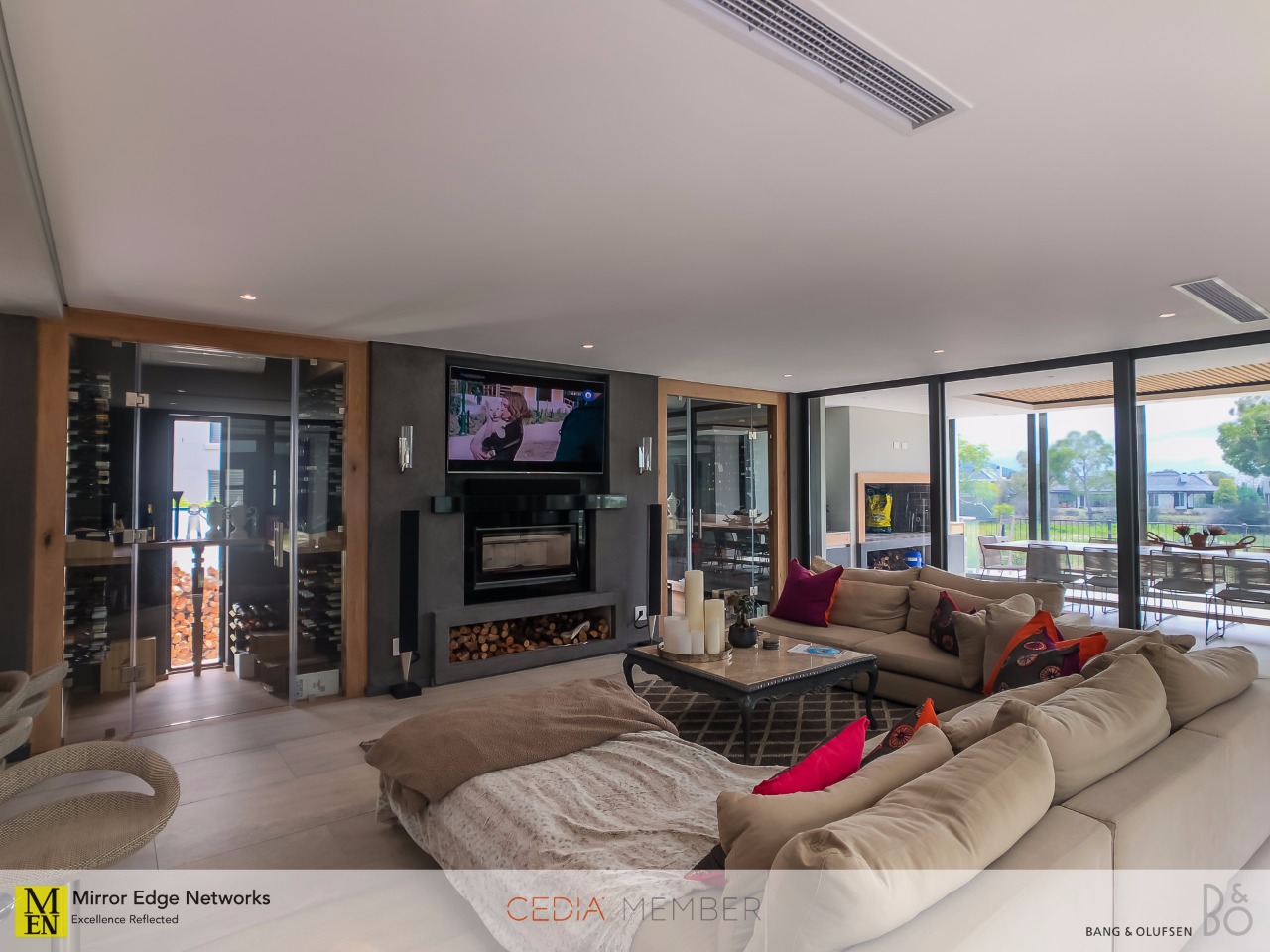 We are proud to have worked with our client during the process of building her house in Pearl Valley golf estate. Bang & Olufsen televisions, audio systems and speakers were installed throughout the house and controlled by Crestron. This is a stunning project which is a showcase of what is possible when using Bang & Olufsen with other equipment. 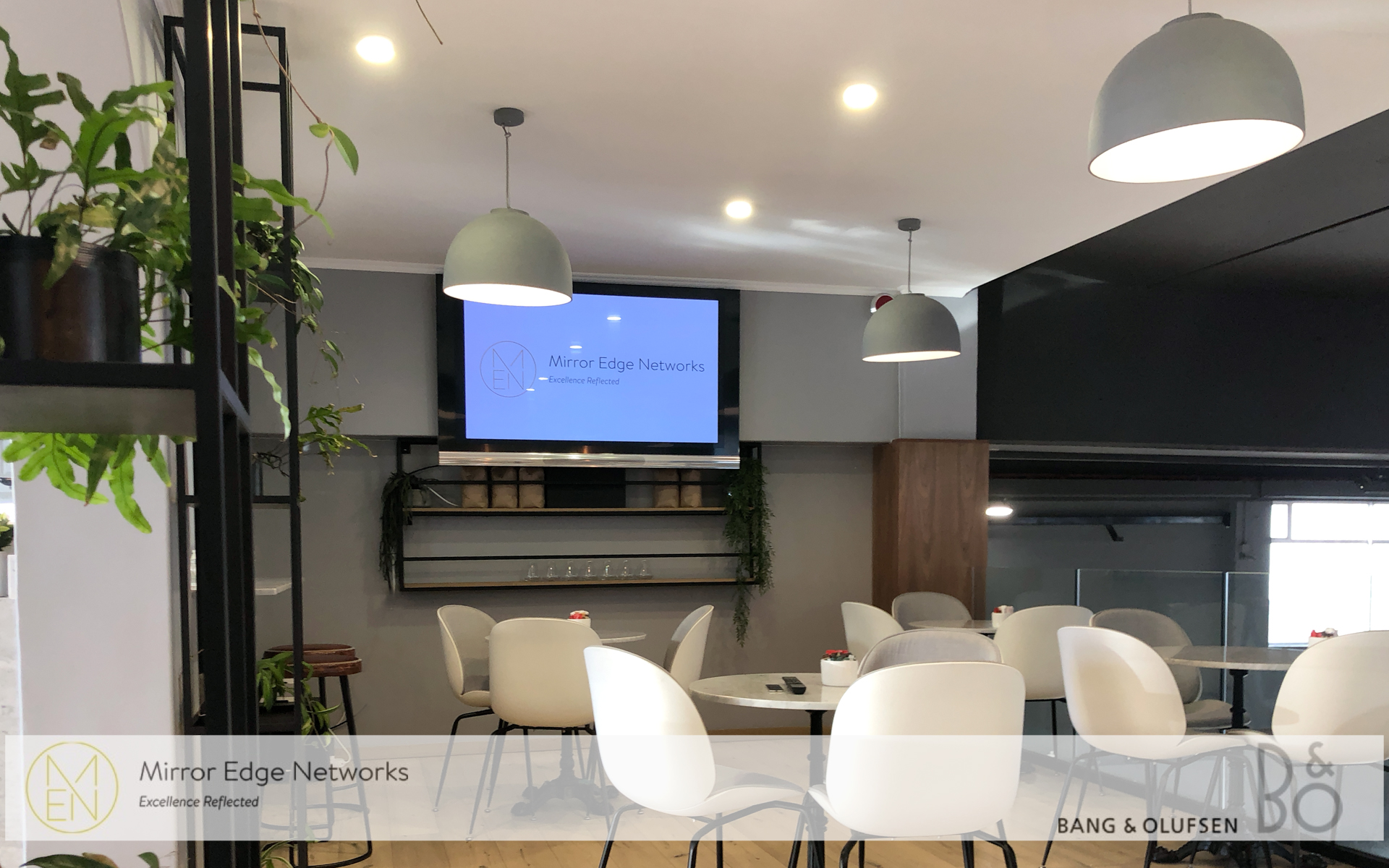 With our long standing relationship with The Archive Cape Town, we offered to install a Bang & Olufsen BeoVision 12-65 television into their coffee shop for guests to watch television while enjoying a coffee. 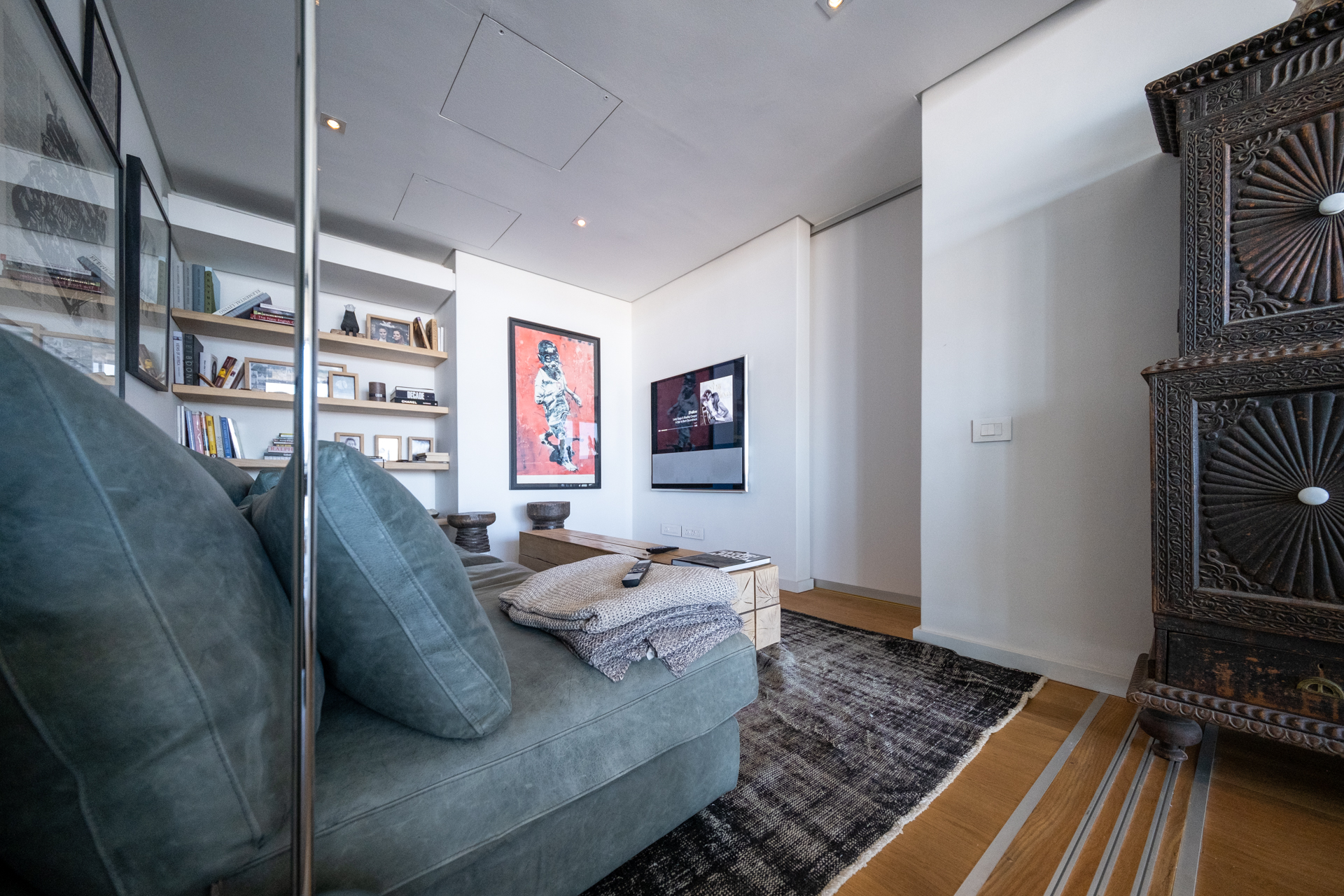 We have been maintaining this Bang & Olufesn installation in the Silo Apartments in The Waterfront Marina, Cape Town. The installation features a BeoVision 10-4o television with BeoLab 3 speakers in a link room configuration. We added a BeoLab 2 subwoofer to this system and changed the location of the BeoLab 3 speakers for better performance in the link room. 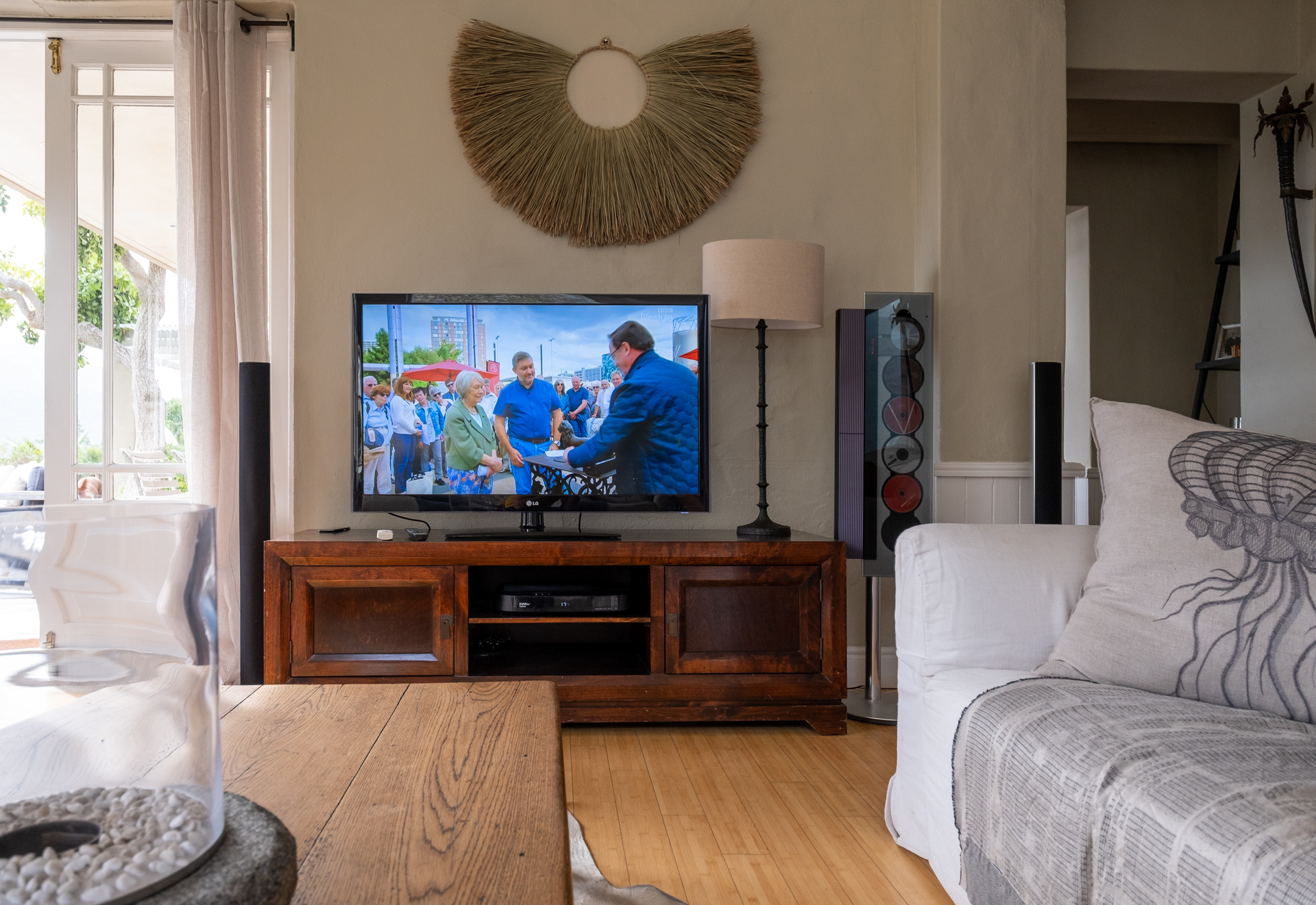 We packed up and moved our clients Bang & Olufsen equipment in Hout Bay. This installation featured in his new house includes a BeoSound 9000 CD player and BeoLab 8000 floor standing HiFi speakers in the formal lounge for music listening. 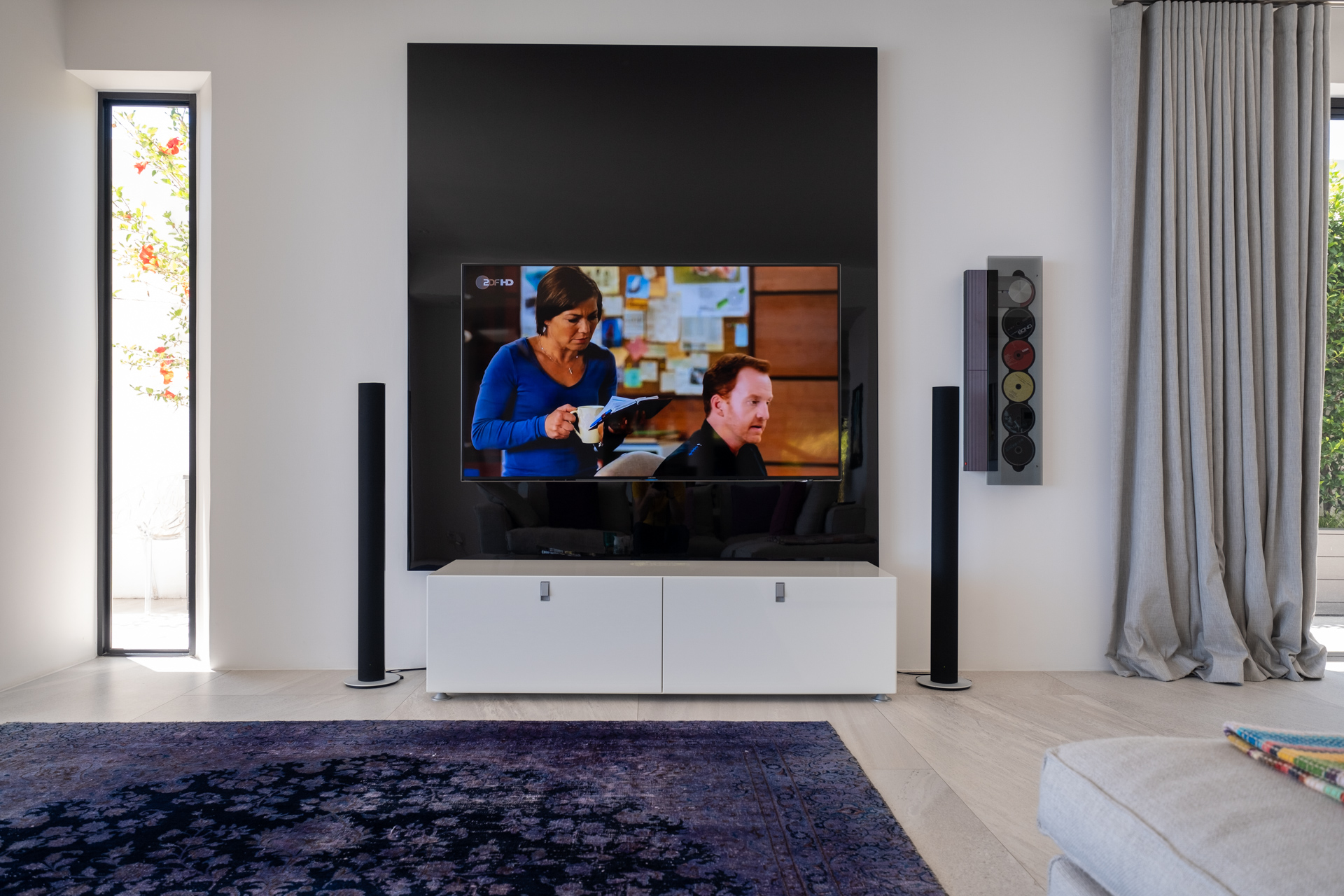 Mirror Edge Networks worked with our client during the renovation of their house in Bantry Bay, Cape Town. The center of this installation features a BeoSound 9000 CD player which is distributed throughout the house via Sonos multroom audio system. 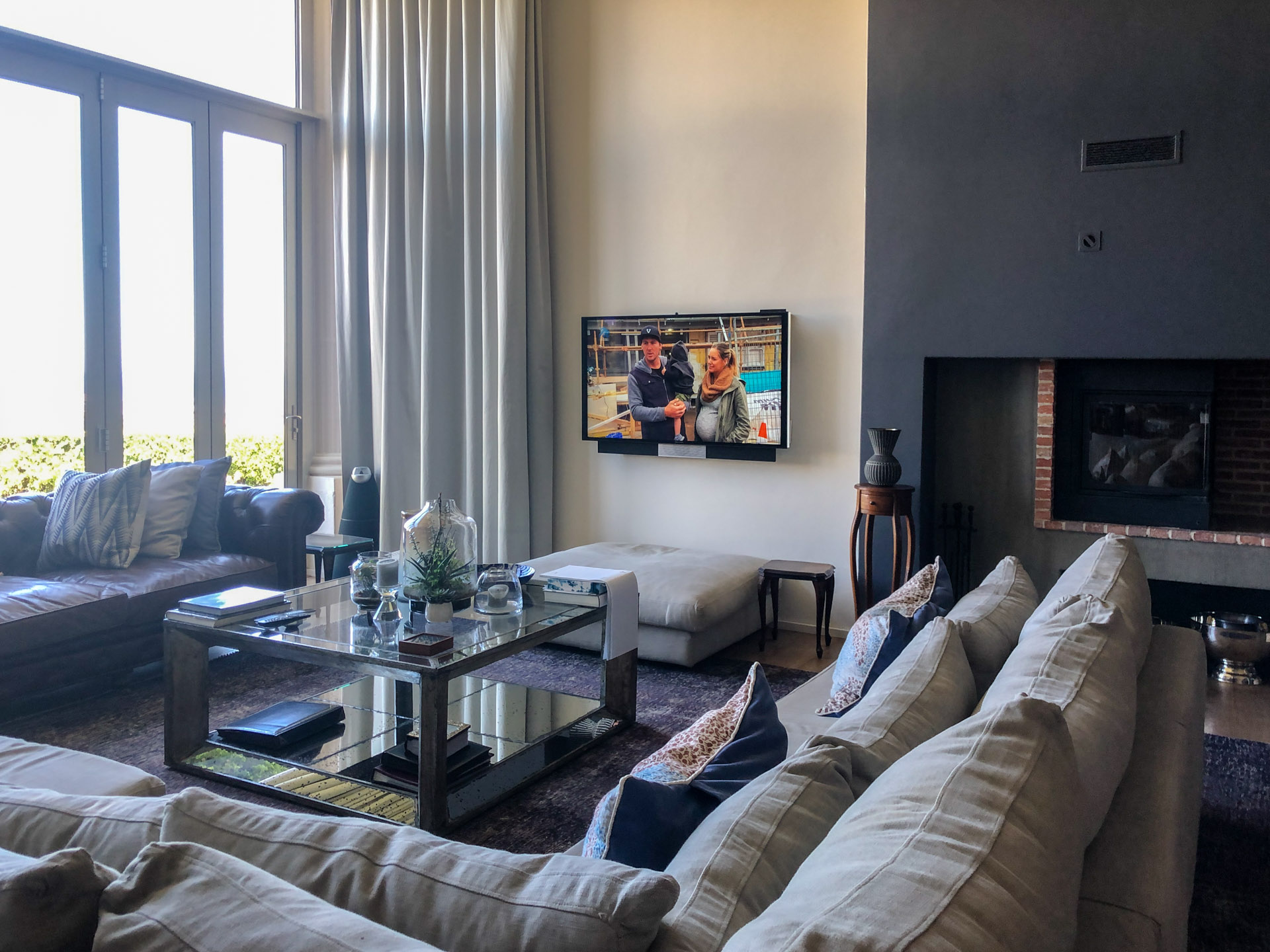 Since Mirror Edge Networks inception in 2012, we have serviced and maintained various installations in Cape Town and surrounds.